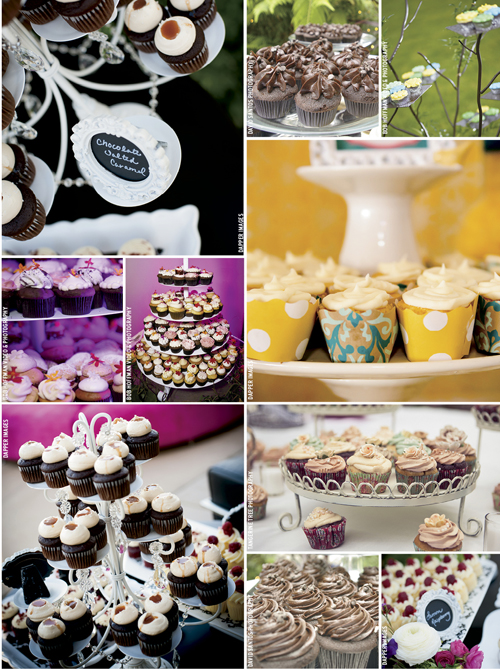 To many who have been in the industry for a while, it seems as though every year trends come and go. However, cupcakes have come and they are not planning on leaving anytime soon.

Here in San Diego, we have keyed in on three of San Diego Style Weddings’ favorite cupcakeries: Cupcake Love, Cups, and Cupcake Squared. All have their own unique twists on cupcakes but all are gourmet and would love to help make your special day as easy as possible.

Many people worry that by having cupcakes, you will lose the traditional aspect of cutting into the wedding cake and feeding it to your spouse’s mouth. However, most cupcakeries offer a “cutting cake” so you can have your cake and eat it too.

Cupcakes have been around for a while but the first cupcakerie in San Diego was Cupcake Squared. With their literally square cupcakes, owner Robin Ross says getting a cupcake is “like getting your own personal gift.” From the shape to their forty flavors, these cupcakes are very unique. Cupcake Squared also offers delivery and set-up for your event.

Michelle Lerach, owner of Cups includes that they like to mix old fashioned comfort food with a fun modern twist. Another perk to Cups is their full teaching kitchen where they offer cooking and baking classes. This could be a fun thing to do with your husband if you are both into cooking or you could have an unconventional bachelorette party and take everybody to a cooking class.

Another different thing about choosing cupcakes instead of a one large cake is that you can pick multiple flavors. “Everyone wants to have choices and not pick just one flavor. Also, they are price effective and they have been around forever,” adds Cupcake Love owner, Ilene Lamb.Cupcake Love specializes in custom orders and can decorate the cupcakes to match your wedding or event. And if you want to have a traditional four or five tier wedding cake at your wedding but you still like the idea of cupcakes, you could have cupcakes the night before at the rehearsal dinner or have them for your bachelorette party.

If you are worried that the store  you want to use does not carry the flavor you want, you can always ask and they can possibly try to make a flavor like that. Lamb says, “ We have had people call in asking for Banana Split and Margarita cupcakes, neither of which we had on the flavor list. So we made some samples for them to try, and now those are both on our list. Customer requests are how we obtain some of our flavors.”

However, as wonderful as all of these cupcakes are, some people worry about whether or not cupcakes will be chic for much longer. But because of the many flavors and designs available, and the ease of cupcakes rather than slicing a huge wedding cake, cupcakes and their versatility will be around for a while.

Lerach adds, “The cupcake is as old as apple pie, and I don’t see it leaving anytime soon.