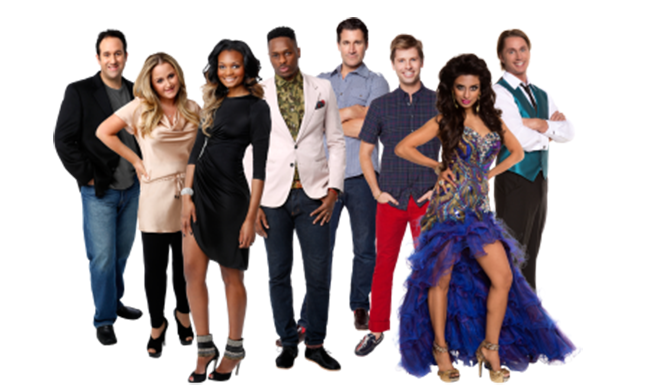 Confession: I am a total BRAVO TV Addict. Seriously, I say all the time that I truly do not need the other channels on my TV because I have BRAVO.  Andy Cohen and his team are constantly bringing new shows into my life that I soon cannot live without. So when I saw the promos for BRAVO’S new show BRAVO’s “Newlyweds: The First Year”, I was so excited. And then the opportunity presents itself to interview one of the couples, how could I pass this up? I couldn’t so before I share my Q&A with Tina Sugandh and Tarz Ludwigsen, new break -out stars of Bravo’s latest docu-series “Newlyweds: The First Year” premiering May 06, here’s a bit more about the couple.

TINA SUGANDH, Profession: Indian International Pop Star
Tina is an Indian international pop star who has recorded with everyone from Timbaland to Ringo Starr and performed at the “Indian Grammy Awards.” Tarz, a former model turned “tech geek,” is president/co-founder of a start-up web company, Pandoodle. Between Tina’s rising success in music and Tarz’s focus on his business, the couple has struggled to find time together over the years. They hope getting married will change that, but find it may be easier said than done. Sex is a stressful issue due to Tarz’s long work days and the pressure of trying to make a baby. With Tarz constantly bumping heads with Tina’s traditional father, family problems also contribute to their marriage.

TARZ LUDWIGSEN, Profession: President/Co-Founder of Pandoodle
Tarz, a former model turned “tech geek,” is president/co-founder of a start-up web company, Pandoodle. Tina is an Indian international pop star who has recorded with everyone from Timbaland to Ringo Starr and performed at the “Indian Grammy Awards.” Between Tina’s rising success in music and Tarz’s focus on his business, the couple has struggled to find time together over the years. They hope getting married will change that, but find it may be easier said than done. Sex is a stressful issue due to Tarz’s long work days and the pressure of trying to make a baby. With Tarz constantly bumping heads with Tina’s traditional father, family problems also contribute to their marriage.

Wedding planning is the number one topic covered on sandiegostyleweddings.com. What advice do you have for brides planning their weddings?
I
would say in the weeks leading up to the wedding, go ahead and put in
every iota of effort you can in order to achieve your version of
“perfection”. But then, once the big day arrives, just give up the
entire concept of “perfection” and don’t stress when things go wrong-as
they most always do! Let it go! Keep in mind that the day is really
about your husband and your families celebrating together. I mean, does
it honestly matter that the bridesmaids’ dresses didn’t end up matching
the exact shade of flowers you ordered? Just have a few glasses of wine
and the colors will all look similar enough.  😉
What was the highlight of your wedding day?
We had a traditional Bollywood wedding, where you walk seven times around a ceremonial fire, and each round is affiliated with a different life promise. One highlight of our wedding was when our dog, Loki, walked with us around the fire. I’m pretty sure the three of us are married now! Another highlight was when my family put on a skit about how we met. They called it “Indian Idol” and sang different songs to represent various moments in our relationship, and they even played the roles of a drunken Paula Abdul, a mean Simon Cowell, and more. It was hysterical, and SO incredibly sweet of them!!

Looking back, was there anything you would have done differently when planning your wedding?
No, but that’s probably because we don’t tend to dwell on what could have been! What’s the point as we can’t change the past. So, in that case, the day was absolute perfection! Our families all had an amazing time, and there was tons of love (and booze) floating around, so what more could we ask for? Sure, there were incidents we could have lived without such as our DJ, bartender, and tent company ALL canceling on us on the week of the wedding, figuring out what to wear the day before the wedding as our designer brought us something that didn’t fit, our priest forgetting to actually pronounce us “man and wife” (which was just insane), and more. But we would have never seen that coming, so we could not have changed that!

How did you end up on BRAVO’s new show Newlyweds: The First Year?
I have been a recording artist for quite some time now and have some music videos with Ringo Starr and Fat Joe out on my site at www.TINAworld.com, and aside from always being a major geek, Tarz used to do various things in the entertainment industry such as underwear modeling to being on Guiding Light for a while, so we just always run into various contacts in the industry. This opportunity presented itself through a contact, and we just said “why not”?

With a booming pop career and a successful technology company, why reality TV?  Why now?

We figured it would be an adventure! Honestly, we had a year filled with some tragic and dramatic moments, and we just both just felt secure enough in our relationship to share it all! I’m sure some couples will be able to relate to our issues such as balancing two very demanding careers while trying to make time for one another, as well as that nagging biological ticking clock, how to deal with bonding with the in-laws, and more!

With the curse of the reality TV marriage, what are you doing to ensure your marriage stands the test of time?
One thing we have that we believe will be clear to viewers is that we are totally best friends, which we both believe is key to longevity. We always make sure to be 100% open about all of our feelings and thoughts, no matter how good or bad they may be. There really is no room for ego or jealousy in a marriage. If you both let down your guard 100% and just be you, it makes life so much easier, and no negative feelings are every harboured.

What are the 3 greatest lessons learned from the first 365 days of marriage?

Looks and lust are fleeting so it’s incredibly important to be best friends, baby making time is more of a chore than romantic fun-time when you have two people with demanding careers, and being totally open, honest, and ego-free about everything is the way to avoid major arguments.

What are the 3 greatest lessons you’ve learned from being on reality TV?
It’s very easy to totally be yourself and to forget there are cameras around when you an incredibly amazing crew and a producer like Lauren Lazin, these new crystal clear HD cameras are not very “kind”, and leaves you reminiscing about the blurrier days when everyone looked great on TV, and as for the third lesson-ask us when we actually see the series as we have not seen a single episode yet! There will be a lot of drama and even some tragic events on the show as we have had a rough year, so let’s hope the 3rd lesson is not “we never should have done this!”
I know I can’t wait for “Newlyweds: The First Year” premiering May 06.  My DVR is set and I can’t wait to follow the four couples through their first year of marriage!!!
Search Our site by Color